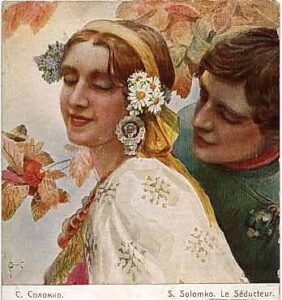 Not only are seducers saying how are they looking for true love, they even believe in that.

No one’s good enough for seducers. They even don’t consider themselves good enough. They like to raise themselves above others and to live their impulses. They don’t take care of other people hearts, and they call it ”search for love”.

An invaluable man doesn’t exist. A seducer doesn’t know that. He threads over peoples’ hearts, and calls that ”search for love”.

A seducer always thinks how much he sacrifices himself. He doesn’t notice sacrifice of others. He thinks that only he suffers, while the suffering of others, that actually he causes – doesn’t notice.

A seducer plays with other people’s hearts. That makes him Devil in itself. A seducer is Devil in human form. He has no respect for the human heart, neither for God. If you don’t respect God, how are you going to respect anyone else?

A seducer always says that he has right to do whatever he wants and that he has his own love rules. In reality, the seducer is just insensitive and evil, and matches love rules to his own egoism. Still, pandering to egoism isn’t love. Seducing has nothing to do with love, but with the inferiority complex. Seduction’s the first Devil’s trait.

Nowadays there are many seducers. You just have to learn to recognize them.

Because seducers don’t know how evil and bad they are. They’re even not aware that they are seducers. They’re even not aware that they don’t search for love but live vanity and evil, and tend to their genitals. The seducer isn’t aware how much he will hurt someone with his insensitivity and irresponsibility. He will always say that he wants only well for you, and how it’s good to be the way something really is.

The common trait of the seducer is to hurt someone’s heart without even noticing that. They don’t realize that people love. They think that the men are made of stone, as well as they are. Their suffering they call love suffering because of their egoism. Still, a seducer doesn’t know the love suffering.

Because his mind and his heart are shallow; he’s so much shallow, when he gets knee-deep into water, he believes that he’s in the deepest sea depths.